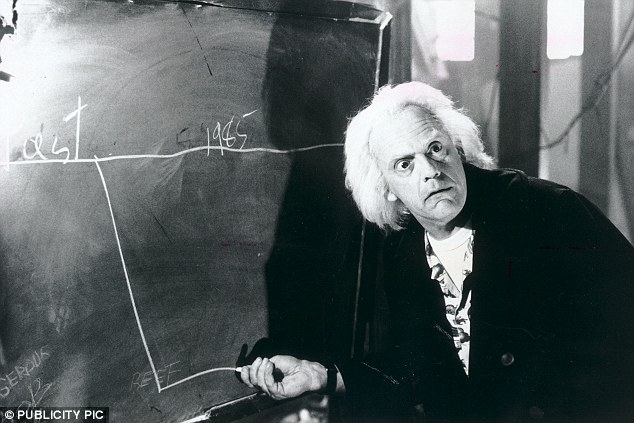 Back in October of 2015, many noted the date October 21, 2015 because it was featured in the 1989 film Back to the Future Part II. It was on October 21, 2015 that Doc Brown, Marty McFly, and Marty’s girlfriend, Jennifer, arrive to help Marty and Jennifer’s children. The 2015 world depicted in the film featured hover boards, flying cars, and power lace Nike shoes, which many hoped would be a reality when 2015 rolled around. This box-office hit and now classic comedy stars Michael J. Fox, Christopher Lloyd, Lea Thompson, and Thomas F. Wilson.

Recently I discovered an ancestral connection to Christopher Lloyd, who is an American actor best known for not only his role as Dr. Emmett “Doc” Brown in the Back to the Future trilogy, but also for his role as Jim Ignatowski in the television series Taxi. This discovery came when I learned that Lloyd’s mother, Ruth, was a Lapham, and that her family is descended from John Lapham (1635-1710) and his wife, Mary Mann (1640-1712). The following is a chart that shows the decent of both Christopher Lloyd (1938-) and my paternal grandmother, Margaret Ann (Lapham) Kernan (1936-2004), from John Lapham (1635-1710) and Mary Mann (1640-1712).

7 thoughts on “My Ancestral Connection to Christopher Lloyd”

This site uses Akismet to reduce spam. Learn how your comment data is processed.

Visit My Other Projects

Among My Branches explores the genealogies and histories of the Kernan, Lapham, Hamilton, and Sebok families, which are the families of my paternal and maternal grandparents William G. Kernan, Margaret A. Lapham, Harry L. Hamilton, and Alberta Sebok. Related branches for each are also explored. Please see the About page for more details.

This work is licensed under a Creative Commons Attribution-NonCommercial-NoDerivatives 4.0 International License.

For all inquiries or comments about the content of this website, to suggest corrections, or to contribute any information or photographs please see the Contact Information page for details about contacting me.